Erb–Duchenne palsy is a lesion of C5 & C6 nerve roots usually produced by the widening of the head shoulder interval. Affected nerves in Erb’s palsy are the axillary nerve, musculocutaneous, & suprascapular nerve. Depending on the nature of the damage, the paralysis can either resolve on its own over a period of months, require rehabilitative therapy or surgery.

Brachial plexus injuries in newborns usually happen during a complicated delivery, such as with a large baby, a breech presentation, or prolonged labour. For example, it can befall if the infant’s head and neck are pulled toward the side at the same time as the shoulders pass through the birth canal. If one side of the baby’s neck is stretched, the nerves may also be stretched, and brachial plexus injury at birth may result. Erb’s palsy can also affect neonates affected by a clavicle fracture unrelated to dystocia.
The injury may also occur as the result of direct violence, including gunshot wounds and traction on the arm, or attempting to diminish shoulder joint dislocation. The level of damage to the component nerves is linked to the amount of paralysis. 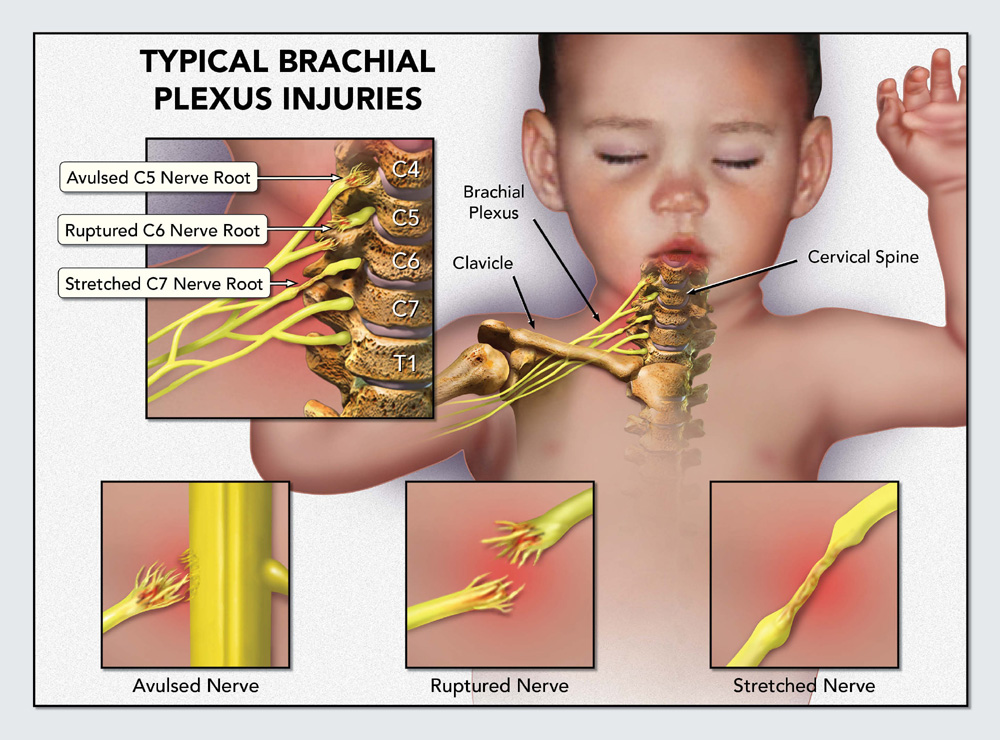 The Erb’s paralysis can be partial or complete; depending on the damage to each nerve can range from bruising to tearing. The commonly involved root is C5 (the union of C5 & C6 roots). The most commonly involved nerves are the suprascapular nerve, musculocutaneous nerve, and the axillary nerve. 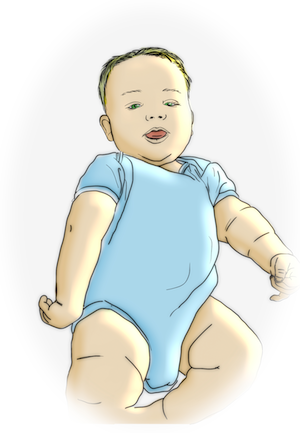 Erb–Duchenne palsy presents as a lower motor neuron syndrome associated with sensibility disturbance and vegetative phenomena.
The Erb’s Palsy symptoms include loss of sensation in the arm and paralysis-atrophy of the deltoid, biceps, and brachialis muscles. If roots are damaged above their junction, paralysis of rhomboids and serratus anterior is added, producing weakness in retraction and protraction of scapula”The position of the limb, is characteristic: the arm flaps by the side and is turned medially, and the forearm is extended and pronated. The arm cannot be elevated from the side; all power of flexion of the elbow is lost, as is further supination of the forearm”. The resulting biceps injury is the main cause of this classic physical position usually called “waiter’s tip”.

The loss of muscular development commences to the arm is much weaker than the unaffected one, and less articulate, with many patients unable to elevate the arm above shoulder height unaided, as well as an elbow contracture.

There are, four classifications of Erb’s Palsy that explain the severity of the nerve damage:

Stretch- The fibres have only signified lightly stretched and the child can recover use of the muscle considerably quickly.

Neuroma- The nerve is seriously injured, but still remains connected. It may heal, but scar tissue may develop at the site of the injury.

Rupture- The nerve is totally pulled apart and cannot repair itself. The muscles it controls will remain paralyzed. It is sometimes desirable to have surgery that will rebuild some nerve function; however, the child is liable to be left with some residual weakness in the arm.

Avulsion- The nerve is torn away from the spinal column, In rare cases. Neonatal/ pediatric neurosurgery is often needed.

The lack of development to the circulatory system can reduce the healing ability of the skin, so that skin damage takes far longer than normal to heal, and infections in the arm can be very common if cuts are not sterilized as soon as possible. This will frequently cause many problems for children since they often injure themselves in the development of their childhoods.

A paediatrician is usually the one to make the diagnosis of a brachial plexus palsy injury, thorough history and physical examination(movement of the affected arm)of Brachial plexus injuries in newborns with focus on neurologic examination(sensation, reflexes- motor reflex) are used to confirm the diagnosis.
It might also be important to look for the presence of a cervical rib. They concluded that a cervical rib was a risk factor for an Erb’s palsy causes.

Your physicians may order an x-ray to rule out the clavicular or humeral fracture, MRI may demonstrate shoulder dislocation; the presence of pseudomeningoceles indicates avulsion injury of the affected spinal roots or other imaging studies such as CT Scan to learn whether there is any damage to the bones and joints of the neck and shoulder. Nerve injury can affect the growth and development of the shoulder. He or she may also do some tests to determine whether any nerve signals are present in the muscle of the upper arm. These may include EMG/Nerve conduction studies.

Some brachial plexus birth palsy may heal without treatment. Many children who are injured during birth better or overcome by 3 to 4 months of age, your physician will re-examine your child often to see if the nerves are recovering. Although it may carry up to two years to recover.

Erb’s Palsy Physiotherapy Treatment
Daily physical therapy is the main treatment method for Erb’s palsy. Because a baby cannot move the injured arm all alone, parents need to take an active role in managing the joints limber and the functioning muscles fit. Your physical therapist will teach you how appropriate handling and positioning of the baby’s arm in good condition and home Erb’s palsy exercises to maximize the child’s potential for recovery.

During the first 6 months treatment, daily Erb’s Palsy Physiotherapy Treatment and range-of-motion Erb’s palsy exercises, done as often as possible during the day, start when a baby is about 3 weeks old. The exercises will keep the range of motion in the shoulder, elbow, wrist, and hand. This will prevent joint stiffness, pain, and joint contracture.

Sometimes splinting may be required to hold the arm in supination and external rotation. The Occupational Therapist will advise on suitable and necessary Erb’s palsy splinting methods.

A dorsal wrist cock-up splint should be prevaricated for the hand that has limited wrist extension but active finger action to progress an active grasp.

Erb’s Palsy Surgery
The expansion of microsurgery and the associated technology renewed consequence in surgical reconstruction and has given rise to more favourable outcomes in comparison to earlier studies. The common Erb’s Palsy Surgery are-
Nerve graft- Depending upon the nerve damage, it may be likely to repair a rupture by “splicing” a donor nerve graft from the different nerve of the child.
Nerve transfer-Nerve transfers Erb’s Palsy Surgery are normally conducted on babies under the age of 9 months since the fast development of younger babies enhances the effectiveness of the procedure. Nerve transfers are not usually carried out on patients older than this because when the procedure is performed on older infants, more impairment than good is done and can result in nerve injury in the area where the nerves did take from. Scarring can differ from faint scars along the edges of the neck to full “T” shapes over the whole shoulder depending on the training of the surgeon and the type of the transplant.
Subscapularis Releases- Subscapularis releases an Erb’s Palsy Surgery, though, are not time-limited. Since it is solely cutting a “Z” shape into the subscapularis muscle to render stretch in the arm, it can be carried out at nearly any age and can be carried out frequently on the same arm; however, this will compromise the uprightness of the muscle.
Latissimus Dorsi Tendon Transfers-Latissimus Dorsi Tendon Transfers include cutting the Latissimus Dorsi in half horizontally in sequence to ‘pull’ part of the muscle around and connect it to the outside of the biceps. This method implements external rotation with varying degrees of resolution. A side effect may be exaggerated sensitivity on the part of the biceps where the muscle will immediately lie since the Latissimus Dorsi has approximately twice the number of nerve endings per square inch of other muscles.

The prognosis is dependent on the severity of the injury, the timing of treatment- the earlier. In many cases, Erb’s palsy resolves on its own with little or no treatment. Mild cases of Erb’s palsy may resolve in three to six months with physical therapy. Erb’s palsy resolves fully in the first year of life in around 70%- 80% of patients and almost 100% if treatment starts in the first four weeks of birth. In different cases, Erb’s Palsy Prognosis, however, if the nerves in the brachial plexus are critically damaged, the injured arm may suffer from continuing weakness or paralysis.