The tibia is the main bone of the leg, It has a proximal and distal end and a shaft, articulating at the knee in proximal and ankle joints in the distal end. It is the second largest bone in the body.

Parts of the Tibia

At the proximal end, the tibia is widened by the medial and lateral condyles. The condyles form a flat surface, known as the tibial plateau.

Medial condyle
Medial condyle is larger than the lateral condyle. Its superior surface connects with the medial condyle of the femur. The articular surface is oval and its large pole is anteroposterior.

On the posterior surface of the medial condyle has a groove. Many vascular foramina mark anterior and medial surfaces.

The articular covering has an inflated medial margin which covers the lateral intercondylar tubercle.

The posteroinferior aspect of lateral condyle of the tibia bears a flat, circular fibular facet and is directed downwards, backward and laterally. This facet articulates with the fibula.

The anterior aspect of the condyle bears a flattened impression.

Tibial Tuberosity
Tibial tuberosity is a prominence projection located on the anterior surface of the proximal tibia, inferior to the condyles. In tibial tuberosity where the patella ligament attaches. 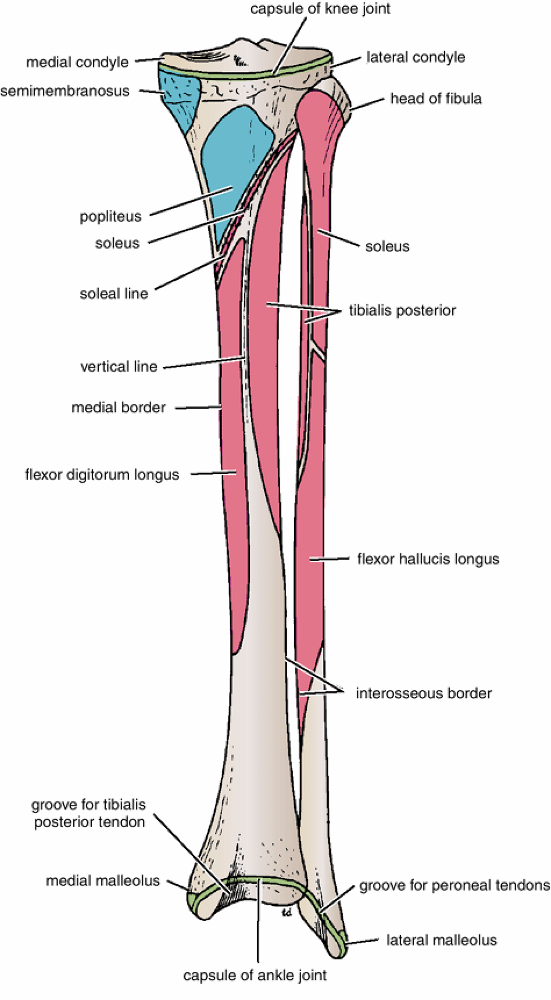 The shaft of the tibia is prismoid in shape and has three surfaces (lateral, medial and posterior) and three borders (anterior, medial and interosseous).

Borders of the shaft of the Tibia

Surfaces of the shaft of the Tibia

The lateral surface rests between the anterior and interosseous borders. In its upper three-fourths it is concave and is directed laterally, and in its lower one-fourth, it is directed forwards.

The medial surface lies within the anterior and interosseous borders. It is subcutaneous in mostly in the upper part.

The posterior surface of the tibia is in between medial and interosseous borders. It is widest in its upper part. A rough ridge described as the soleal line crosses it here extending from the fibular facet, running downwards and medially, and terminating by connecting the medial border at the junction of its upper and middle thirds.

Above the soleal line, the posterior surface is in the form of a triangular area whereas the area below the soleal line is elongated and divided into medial and lateral parts by a vertical ridge which regards a downward directed nutrient foramen.

The nutrient foramen transmits the nutrient artery which is a branch of the posterior tibial artery.

The distal end of the tibia is expanded but lesser than the upper end. It has a downward projection on the medial side described as a medial malleolus.

It has five surfaces –

The anterior surface of the lower end has an upper smooth part and a lower rough including the grooved part. 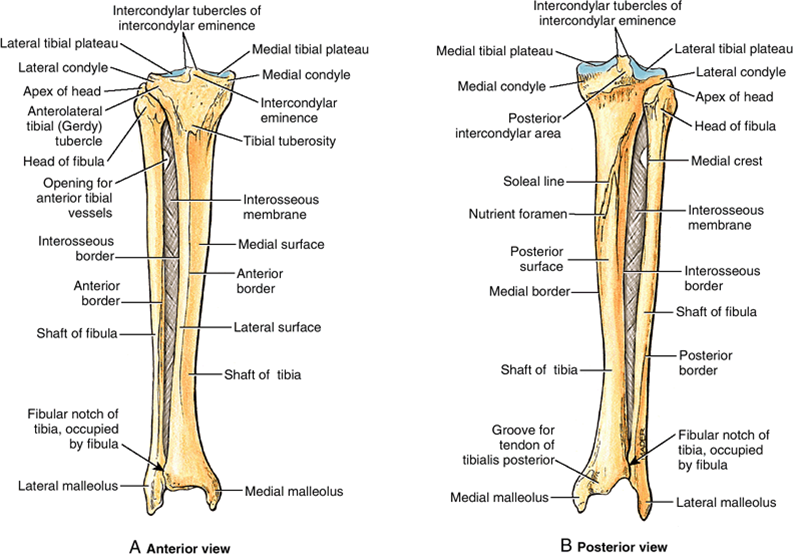 The inferior surface of the lower end of the tibia is articular. It articulates with the superior trochlear surface of the talus and thus takes part in making the ankle joint.

The posterior surface is traversed by a shallow groove directed obliquely downward and medial-ward, assisting for the passage of the tendon of the flexor hallucis longus.

Muscles Attachments of the Tibia 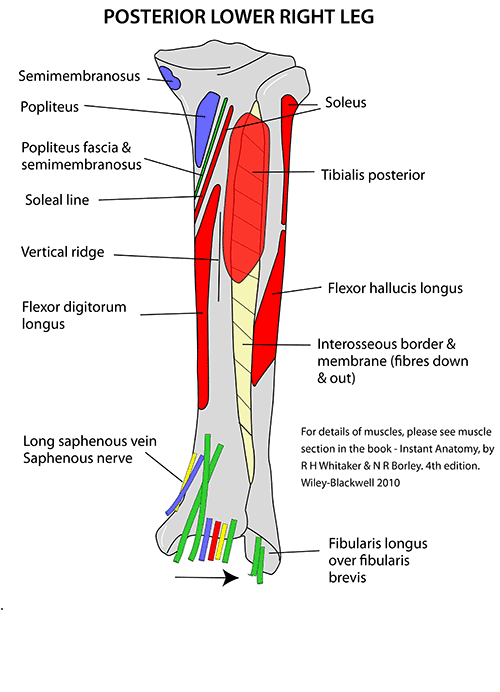 Blood supply of the Tibia

The tibia is blood supplied from two sources: as the main source is the nutrient artery, and periosteal vessels arisen from the anterior tibial artery.

Articulation of the Tibia

The tibia is a role of four joints; the ankle, knee, superior and inferior tibiofibular joint.
In the knee joint, the tibia articulates one of the two connections with the femur.This is the weight-bearing part of the knee joint. The tibiofibular joints are the joints of the tibia and fibula which provides very little movement. A proximal tibiofibular joint is a little plane joint. The joint is formed within the undersurface of the lateral tibial condyle and the head of the fibula. The distal tibiofibular joint is formed by the rough, convex surface of the distal end of the medial side of the fibula, and a rough concave covering on the lateral side of the tibia. The ankle joint known as the talocrural joint that connects the distal ends of the tibia and fibula with the proximal end of the talus. The articulation within the tibia and the talus bear more weight than in the smaller fibula and the talus.

Ossification of the Tibia

The tibia is ossified from three centers; a primary center for the shaft of the tibia and a secondary center for one for either end.

Clinical Significance of the Tibia

The upper end of the tibia is the most common site of acute osteomyelitis.