The ribs are a set of 12 pairs bones which form the protective ‘cage’ of the thorax. The first seven sets of ribs, known as “true ribs” also known as vertebrosternal ribs, are directly articulate with the vertebral column posteriorly and terminate anteriorly as costal cartilage.

Rib 1 is unique and It is a short, flat, C-shaped bone. The vertebral attachment of Rib 1 can be found just below the neck and found above the level of the clavicle. Ribs 2 through 7 have a more traditional appearance and become longer and less curved as they progress downwards. Ribs 8 through 12 are known as “false ribs”, Ribs 8 through 10 sharing a common cartilaginous connection to the sternum, while the eleventh and twelfth ribs are termed floating ribs or vertebral ribs. The eleventh and twelfth ribs are attached to the vertebrae only.

The ribcage is separated from the lower abdomen by the thoracic diaphragm which controls breathing. The ribs protect the internal thoracic organs. They further have a function in breathing – While the diaphragm contracts, the thoracic cavity is enlarged, reducing intra-thoracic pressure and pulling air into the lungs. 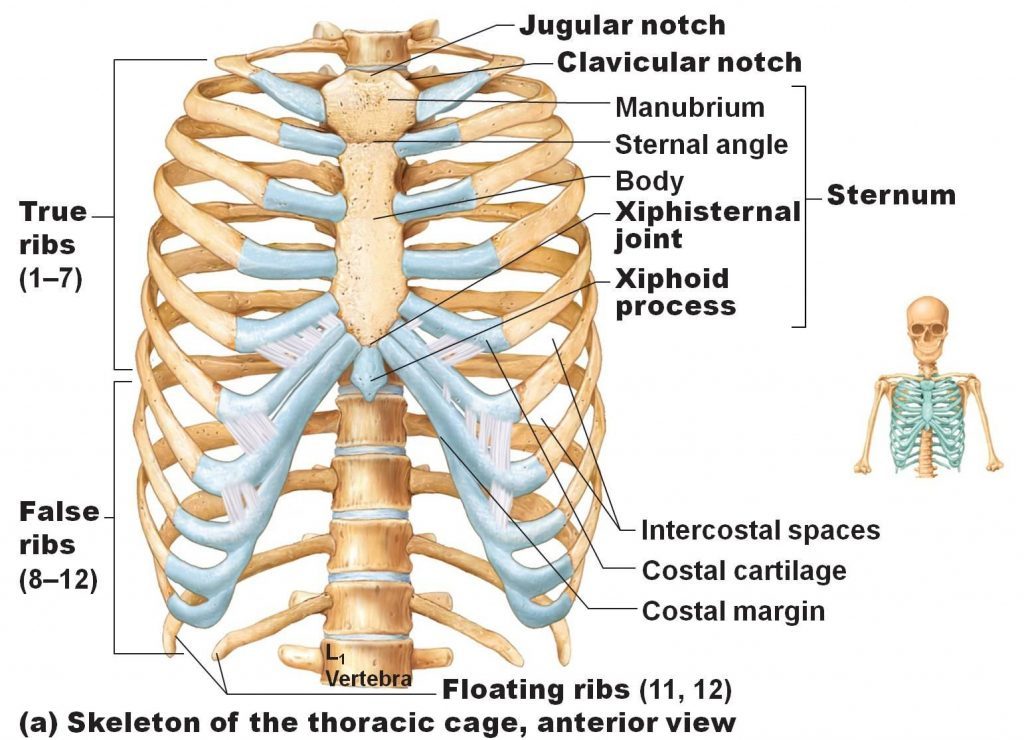 The posterior or vertebral end presents a head, neck, and tubercle.
The head is marked by a kidney-shaped, and has two articular facets divided by a horizontal crest into two facets for articulation with bodies of two adjacent thoracic vertebrae; the upper facet is the smaller, and the crest is attached the interarticular ligament. 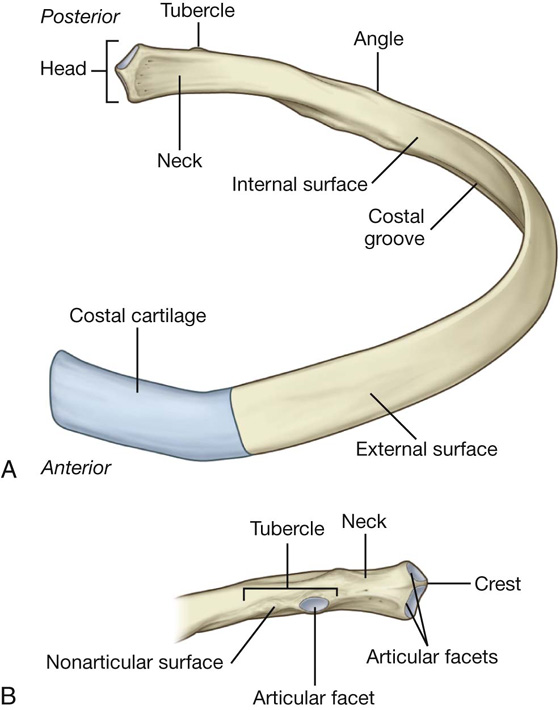 The neck contains no bony prominences, which extends lateralward from the head; it is about 2.5 cm. long, but simply connects the head with the body. The anterior surface of the typical ribs is flat and smooth, its posterior rough for the attachment of the ligament of the neck, and perforated by numerous foramina.

Where the neck meets the body there is a roughed tubercle, with a facet for articulation with the transverse process of the corresponding vertebrae.The tubercle is much more prominent in the upper than in the lower ribs.

The body or shaft of the rib is flat, curved with two borders, a superior and an inferior and two surfaces, an external and an internal.The external surface is convex, smooth, and marked, a little in front of the tubercle, by a prominent line, directed downward and lateralward; this gives attachment to a tendon of the Iliocostalis.The internal surface of the shaft has a groove for the neurovascular supply of the thorax, preserving the vessels and nerves from injury.The superior edge of the groove is rounded and serves for the attachment of an Intercostalis internus muscle; the inferior edge corresponds to the lower margin of the rib, and the inferior border is thin and has attached to it an Intercostalis externus muscle.

The anterior or sternal end is flattened, oval, and concave depression, into which the costal cartilage is received.

Atypical Ribs
Rib 1 is shorter, most curved and wider than the other ribs. 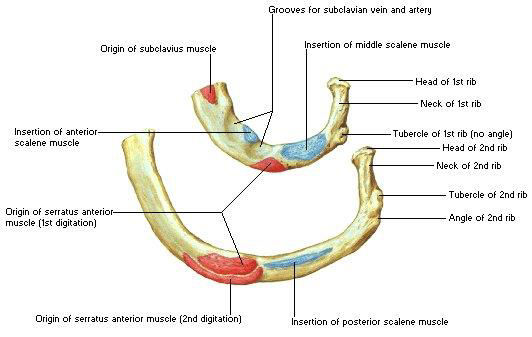 The first rib surfaces looking upward and downward, and its borders inward and outward. The superior surface is marked by two grooves, which make way for the subclavian vessels. The rib 1 head is small, rounded, and holds only a single articular facet, for articulation with the first thoracic vertebra. The neck is narrow and rounded. The tubercle, thick and extended, is placed on the outer border. The upper surface of the body is marked by two shallow grooves, separated from the scalene tubercle, for the attachment of the Scalenus anterior muscle. The under surface is smooth and a costal groove. The outer border is convex, thick, and rounded, and provides attachment to the first digitation of the Serratus anterior muscle; the inner border is concave, thin, and sharp, and designated by the scalene tubercle. The anterior end is larger and thicker than that of any of the other ribs.

The second rib is considerably longer than the first but has a very similar curvature. The body is not flattened horizontally similar that of the first rib. Its external surface is convex; near the middle of it is a rough projection of the origin of the serratus anterior muscle; behind and above this is attached the Scalenus posterior muscle. The internal surface of the second rib is concave and is directed downward and a little inward: on its posterior aspect there is a short costal groove.

The tenth rib has only a single articular facet with its numerically corresponding vertebrae.

The 11 and 12 ribs have no necks or tubercles, and are pointed at their anterior ends, have each a single articular facet on the head for articulation with their corresponding vertebrae. The eleventh has a slight angle and a shallow costal groove. The twelfth rib is much shorter than the eleventh. Sometimes the twelfth rib is even tinier than the first rib.

The rib cage is an arrangement of bones in the thorax and vertebrates. The rib cage is formed by the vertebral column, ribs, and sternum and encompasses the heart and lungs. The rib cage, also distinguished as the thoracic cage, is a bony and cartilaginous structure which forming a core portion of the human skeleton. A human rib cage consists of 24 ribs, the sternum, costal cartilages, and the 12 thoracic vertebrae. The rib cage makes up the thoracic wall and provides attachments for the neck, thorax, upper abdomen, and back muscles.

Articulations of the Ribs

Anterior Articulations
Ribs 1-7 connect individually to the sternum.
Ribs 8 – 10 join the costal cartilages above to them.
Ribs 11 and 12 have not an anterior attachment and point in the abdominal musculature. Because of that, they are sometimes designated ‘floating ribs’.

Ossification of the Ribs

Secondary centers of all the ribs appear at puberty.
The first rib ossifies by 3 centers: 1 primary center for the shaft and 2 epiphysial centres– 1 for head and 1 for tubercle.

Eleventh and 12th ribs ossify by 2 centers: 1 primary center for the shaft and 1 epiphysial center for the head.
Fusion in all the ribs happens at the age of 20 years.

Clinical Significance of the Ribs

Rib fractures are the usual frequent injury to the rib cage. Rib fractures usually occur in the middle ribs, as a result of crushing injuries or direct trauma. A common difficulty of a rib fracture is further soft tissue damage from the broken pieces. Structures most in danger of injury are the lungs, spleen or diaphragm.
When numerous adjoining ribs incur two or more fractures each, this can produce in a flail chest which is a life-threatening situation.It reduces full expansion of the ribcage, thus influencing the oxygen content of the blood. Flail chest is managed by fixing the affected ribs, restricting their paradoxical movement.