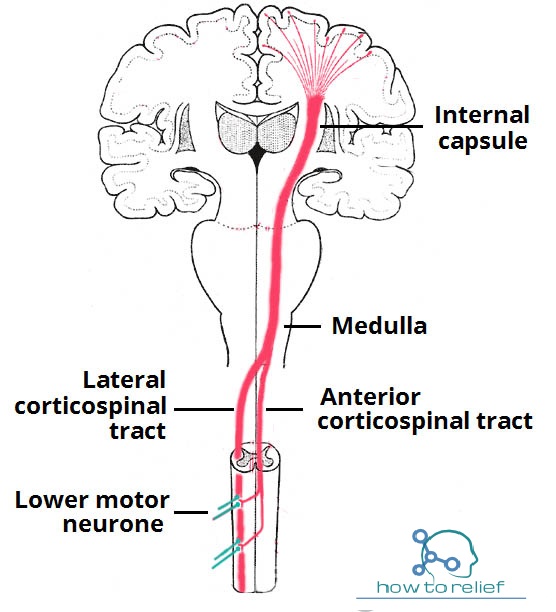 1. The Babinski sign is present. The great toe becomes dorsally flexed, and the other toes fan outward in response to scratching the skin along the lateral aspect of the sole of the foot. The normal response is plantar flexion of all the toes. Remember that the Babinski sign is normally present during the first year of life because the corticospinal tract is not myelinated until the end of the first year of life.

The explanation for the Babinski sign is thought to be the following. Normally, the corticospinal tracts produce plantar flexion of the toes in response to sensory stimulation of the skin of the sole. When the corticospinal tracts are nonfunctional, the influence of the other descending tracts on the toes becomes apparent, and a kind of withdrawal reflex takes place in response to stimulation of the sole, with the great toe being dorsally flexed and the other toes fanning out.

2. The superficial abdominal reflexes are absent. The abdominal muscles fail to contract when the skin of the abdomen is scratched. This reflex is dependent on the integrity of the corticospinal tracts, which exert a tonic excitatory influence on the internuncial neurons.

3. The cremasteric reflex is absent. The cremaster muscle fails to contract when the skin on the medial side of the thigh is stroked. This reflex arc passes through the first lumbar segment of the spinal cord. This reflex is dependent on the integrity of the corticospinal tracts, which exert a tonic excitatory influence on the internuncial neurons.

4. There is the loss of performance of fine-skilled voluntary movements. This occurs especially at the distal end of the limbs. 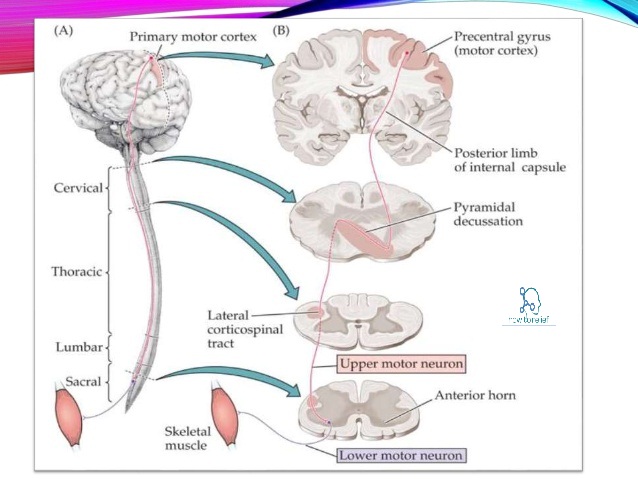 The following clinical signs are present in lesions restricted to the other descending tracts:

1.Severe paralysis with little or no muscle atrophy (except secondary to disuse).

3. Exaggerated deep muscle reflexes and clonus may be present in the flexors of the fingers, the quadriceps femoris, and the calf muscles.

4.Clasp-knife reaction. When the passive movement of a joint is attempted, there is resistance owing to spasticity of the muscles. The muscles, on stretching, suddenly give way due to neurotendinous organ-mediated inhibition.

It should be pointed out that in clinical practice, it is rare to have an organic lesion that is restricted only to the pyramidal tracts or only to the extrapyramidal tracts. Usually, both sets of tracts are affected to a variable extent, producing both groups of clinical signs.