Trigger Finger: Trigger finger is characterized by snapping or locking of the involved flexor tendon of the finger, associated with pain and dysfunction. When the tendon sheath becomes inflamed, it can make movement difficult and sometimes result in trigger finger. Trigger finger is medically termed stenosing tenosynovitis. 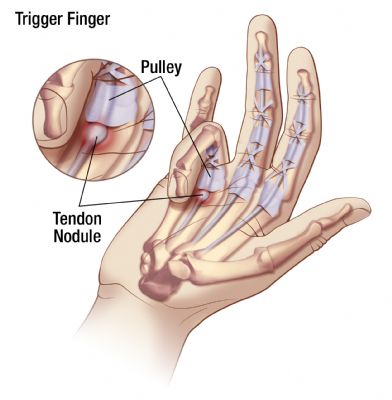 Symptoms of trigger finger may occur When attempting to extend the digit, a similar hesitation may occur before it “snaps” into full extension. In severe cases, the digits must be manually brought into full extension or flexion, limited finger movement & Catching or popping sensation in your finger or thumb joints. The closure is frequently associated with pain at the base of the digit on the palm of the hand. Sometimes, one or more fingers are affected.

Diagnosis is made by history and physical examination alone. Diagnosis doesn’t require any detailed testing. Through the physical exam, your physician will ask you to open and close your hand, checking for areas of pain, smoothness of movement and confirmation of locking. The triggering is usually more pronounced late at night and in the morning, or while gripping an object tightly.

The goal of treatment in trigger finger is to eliminate the swelling and catching/locking, allowing full, painless movement of the finger or thumb.

Over-the-counter pain medications, non-steroidal anti-inflammatory medicines (NSAIDS) such as Naproxen, Ibuprofen or acetaminophen can be used to relieve the pain.

The first step in treatment is to stop doing activities that worsen the condition. Splinting is one of the best ways to limit motion. Splints are usually worn for 6-10 weeks. It should be viewed that splinting -lower benefit rates in patients with severe triggering or longstanding continuance of symptoms. 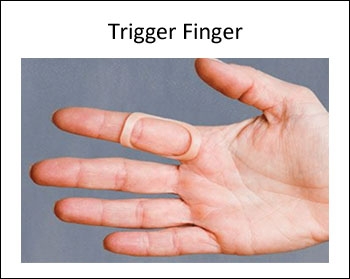 In the cases of trigger finger, liquid corticosteroids are injected into the tendon sheath at the base of the affected finger or thumb. 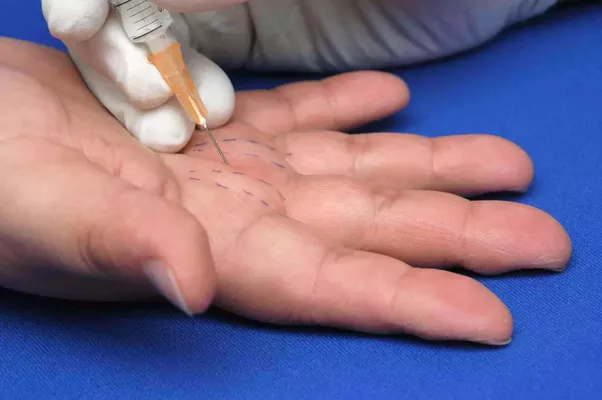 Corticosteroids are thought to work by reducing swelling of the tendon, allowing the tendon to move freely again. This can sometimes happen within a few days of having the injection, but it normally takes a few weeks. It’s considered that corticosteroid injections are an effective strategy for 50–80% of people with the trigger finger. However, they’re usually less effective in certain health conditions, such as diabetes and rheumatoid arthritis. A newer method is collagenase (Xiaflex) injection. Collagenase is directly injected into the contracted “cord” of scar tissue. The scar tissue that forms the contracture is composed of collagen. Collagenase is an enzyme that breaks up the collagen.

The goal of surgery widens the opening of the tunnel so that the tendon can easily move through the tunnel. The surgery is performed through a small incision in the palm or sometimes with the tip of a needle. Surgery may initially cause some pain or soreness. Doctors may recommend over-the-counter painkillers for relief. This is usually done on an outpatient basis, that you will not need to stay overnight at the hospital.
Most people are given an injection of local anesthesia to numb the hand for the surgical procedure.
Immediately after surgery, a person should be able to move their finger or thumb. Be gentle with movements at the beginning; full movement can be expected to return in 1 to 2 weeks. Rehabilitation time may be longer for someone who has had trigger finger surgery on more than one finger or thumb.
Some people may need to do finger exercises or undertake hand therapy to return full movement to the affected digit.