Sulphonylureas: Sulphonylureas are a class of oral tablet pills that control blood sugar levels in patients with type 2 diabetes. They work chiefly by stimulating the cells in the pancreas to produce more insulin. They also stimulate insulin to work more effectively in the body.

They are usually considered once or twice a day, with or shortly before a meal, and can be taken other diabetes drugs such as metformin. They are suitable for people who are not overweight, as they may promote weight gain.

How Sulphonylureas Work?
Sulphonylureas bind to a channel of proteins in the pancreas (ATP-sensitive potassium channel), which depolarizes the cell by preventing potassium from exiting. This depolarization initiates voltage-gated Ca2+ channels. The increase in intracellular calcium commences to an increased fusion of insulin granules with the cell membrane, this triggers a sequence of events within the cells that begins to an increase in the amount of insulin that is produced by pancreatic beta cells.

The sulfonylureas further sensitize β-cells to glucose, that they restrict glucose production in the liver, that they reduce lipolysis (release of fatty acids by adipose tissue) and reduce the clearance of insulin by the liver. 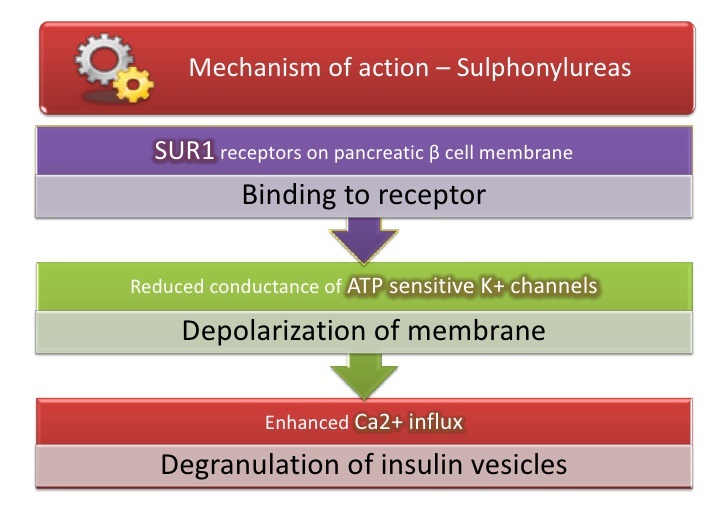 The primary benefit of sulphonylureas is their effect on increasing insulin secretion and therefore helping to reduce blood glucose levels.

Medications in the Sulfonylurea Family

Side Effects of Sulphonylurea