Scapula: The scapula is also known as the shoulder blade. It articulates with the humerus at the glenohumeral joint, and the clavicle at the acromioclavicular joint. It is a triangular, flat bone, which attachment for 17 muscles.

Muscles of the Scapula

Costal Surface
The anterior surface of the scapula is known as the ‘costal’ surface. 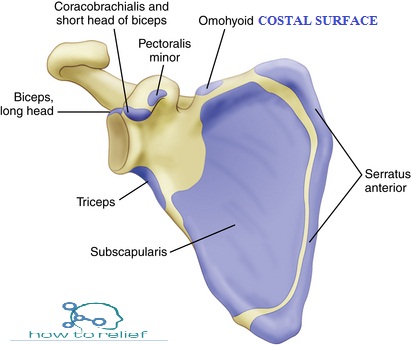 This side of the scapula is relatively unremarkable, with a concave depression over most of its surface, called the subscapular fossa. The subscapularis muscle originates from this side.

The superolateral surface of the costal scapula is the coracoid process. The pectoralis minor attaches here, while the coracobrachialis and biceps brachii muscles originate from this projection.

The lateral surface of the scapula meets the humerus. It is the position of the glenohumeral joint, and of numerous muscle attachments.

Supraglenoid tubercle – A roughening immediately above to the glenoid fossa, this place is the attachment of the long head of the biceps brachii.

Infraglenoid tubercle – A roughening immediately under to the glenoid fossa, this place is the attachment of the long head of the triceps brachii.

Spine – This most prominent feature of the posterior scapula. It goes transversely beyond the scapula, dividing the surface into two-

Supraspinous fossa – The area above the spine of the scapula, it is much smaller than the infra spinous fossa and is more convex in shape. The supraspinatus muscle originates from this area.

Infraspinous fossa – The area below the spine of the scapula, it displays a convex shape. The infraspinatus muscle originates from this area.

Acromion – ridge of the spine that extends over the glenohumeral joint and connects with the clavicle.

Ligaments & Bursae of the Scapula

Ligaments of the Scapula

Bursae of the Scapula

Ossification of the Scapula

Clinical Significance of the Scapula

An abnormally projecting inferior angle of the scapula is identified as a winged scapula and can be produced by paralysis of the serratus anterior muscle. In this situation, the sides of the scapula nearest the spine are located outward and backward. The image of the upper back is assumed to be wing-like.

How Do I Get NetZero Free Internet & TV Channel

Cricket Bring Your Own Phone: Guideline 2023

Salvation Army Hotel Vouchers Online: How To Get in 2023