Attachments of the Pectoralis Major Muscle 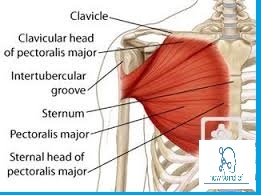 Function of the Pectoralis Major Muscle