Laparoscopic Cholecystectomy: Minimal access surgery has revolutionized the modern surgical sciences by bringing in innovativeness and superior technology. This form of innovation reduces mechanical and psychological trauma to the patient that would otherwise be massive for them after any form of conventional surgery. Moreover, from an aesthetic point of view, minimal access surgery has gained popularity and acceptance over the years. It has crossed all traditional boundaries of specialities, sub-specialities, and disciplines.

Laparoscopy is nothing but the mere extension of one form of minimal access surgery. 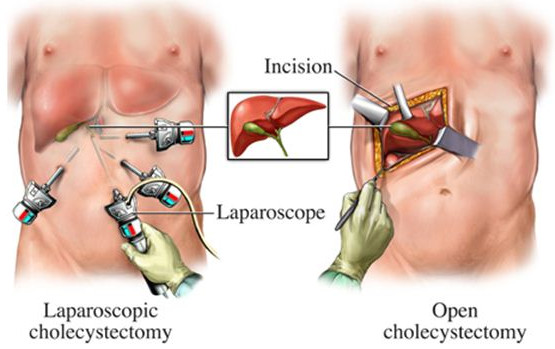 In this surgery, small openings are created in the patient’s abdominal wall that allows the introduction of a camera and other operative devices. These openings are called ‘ports’. To accommodate instruments into the abdominal cavity and to create the adequate workspace in that cavity, air is insufflated to distend the abdomen in a convenient manner. After that procedure are performed through the ports with the aid of specially designed and highly sophisticated laparoscopic instruments.

Why this particular procedure has become the mainstay in the treatment of gallstone diseases- does not require any complicated understanding. In a conventional open procedure, the surgeon has to create a wound which is sufficiently large to carry out safe dissection at the operative field and target site. At the same time, retractors are placed in a congenial manner, to gain adequate exposure to work freely. All these add mechanical and somatic trauma to the patient both during and after surgery. The pain of the wound, reinforced by tissue trauma during retraction becomes the major culprit for post-operative morbidity and delayed recovery. In addition to that complication related to pain-mediated less mobilization after surgery like respiratory tract infection, delayed return of gut motility and deep vein thrombosis add further insult to injury. Wound-related complications like- infection, dehiscence, bleeding, and herniation may enlarge the list of morbidity factors.

In contrast, during laparoscopic procedures, only four small openings are made without creating a major wound. There is minimal handling of surrounding intestines- thus preventing less tissue trauma. Improvement in visualization makes targeted surgery easier producing less collateral damage. Retractions are made by already created space within the abdominal cavity by air insufflation. Because the body cavity is not exposed to the atmosphere in comparison to open surgery, loss of temperature through cooling and evaporation does not occur. All these factors lead to less post-operative pain, decreased the length of hospital stay, diminished rate of complications, earlier return of normal activities and greater aesthetic achievement while maintaining surgical proficiencies. For the aforementioned reasons, laparoscopic cholecystectomy has stood tall with time when it comes to managing a patient with gallstones.

Like any other surgery, it is not devoid of complications. Because space is created in a closed cavity by air insufflation, some sorts of physiological changes can occur in cardiovascular and respiratory systems and may lead to some complications of the mentioned systems. That’s why extra precaution is required while doing laparoscopic cholecystectomy in patients with respiratory and cardiac problems. Port creation may be associated with future wound infection, bleeding or herniation- some well-recognized complications. Access to the abdomen may be associated with inadvertent injury to the gut. During cholecystectomy, some dreadful complications may arise; such as- bleeding or injury to the bile duct, gut etc. These are specifically life-threatening. Moreover, some gall bladders are difficult to remove because of poor anatomy and pathological process. In these cases, the decision may need to be taken during surgery to convert this into open form. In obese patients, access may be difficult. Patients who underwent previous abdominal surgeries may pose special problems to surgeons. Patients with abnormal bleeding tendencies and chronic liver problems are also difficult to treat. Despite having some complications, one should keep in mind that these are not very commonly happening and inexperienced hands, these are one-off incidents.

Among all the complications, bile duct injuries require special attention because it happens at a more common rate than the other ones and may be very serious. Multiple different factors have been described for this type of injury. It is important to note that most of the injuries are not recognized during laparoscopy, which makes the condition a tricky one to management. Increase in expertise and proficiency may certainly help in reducing the complications. Patient selection remains the key to prevent this event. Having said that, the incidence of bile duct injury is only between 1 to 3% when performed by the experienced surgeon.