Joint: A joint is an attachment between bones in the body which link the skeletal system. They are constructed to permit for different degrees and types of movement. Some joints, such as the elbow, knee, and shoulder, are self-lubricating, almost frictionless, and are able to execute smooth and precise movements. Other joints such as sutures between the bones of the skull allow very little movement (only during birth) in order to protect the brain. The connection between a tooth and the jawbone is described as a fibrous joint. 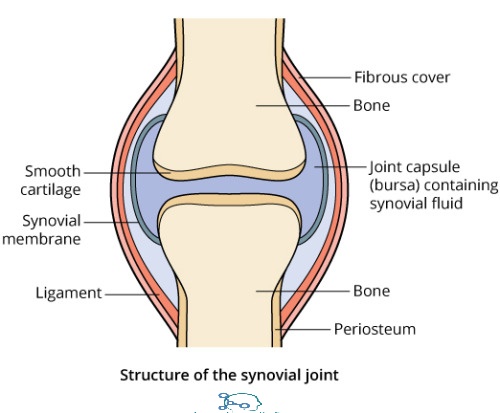 Fibrous joints-Fibrous joints are formed of tough collagen fibers and include the sutures of the skull and the syndesmosis joint that holds the ulna and radius of the forearm together, the middle tibiofibular joint is examples of syndesmosis joints. Teeth articulate among their sockets in the maxillae (upper teeth) or the mandible (lower teeth) is known as gomphosis a type of fibrous joints.

Synovial joints-A synovial joint is a joint filled with synovial fluid. They allow a huge range of movements, which are defined by the arrangement of their surfaces and the supporting ligaments and muscles. There are many different classes of synovial joints in the body, including gliding- 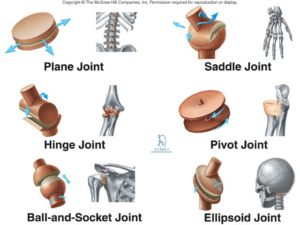