Insulin Resistance: Insulin, a hormone produced by the pancreas, permits cells to absorb glucose so that it can be utilized as energy.  Insulin resistance is a situation in which a given concentration of insulin produces a less-than-expected biological effect.

Insulin resistance has also been described as the requirement of 200 or more units of insulin per day to succeed in glycemic control and to inhibit ketosis. 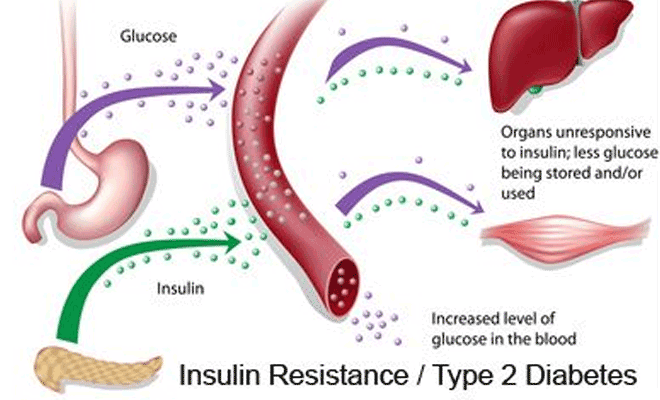 One in three Americans—half of those age 60 and older— have a silent blood sugar complication known as insulin resistance.

In insulin resistance, muscle, fat, and liver cells do not react accurately to insulin and thus cannot efficiently absorb glucose from the bloodstream. As a consequence, the body needs higher levels of insulin to maintain glucose to enter the cells.

If diabetes has not developed, insulin resistance does not usually present any symptoms. The symptoms only start to develop once it leads to secondary effects such as higher blood sugar levels, symptoms may include:

If insulin resistance extends into prediabetes or types 2 diabetes, the symptoms will include the classic symptoms of type 2 diabetes.

International Journal of Obesity-overweight people who lost 10% of their weight over diet plus exercise observed insulin responsiveness improve by an impressive 80%.