The humeral upper extremity comprises a rounded head, a narrow neck, and two short processes (tubercles/ tuberosities). The body is cylindrical in its upper section and more prismatic below. The lower extremity comprises 2 epicondyles, 2 processes (trochlea & capitulum), and 3 fossae (radial fossa, coronoid fossa, and olecranon fossa). And it refers to its true anatomical neck, the constriction below the greater and lesser tubercles of the humerus to as its surgical neck for its tendency to fracture, thus often becoming the focus of surgeons.

Head is a large, rounded, projection that reaches medially from the bone’s proximal end. It connects with the glenoid fossa of the scapula to form the glenohumeral joint.

Greater Tubercle is a large, roughened area placed lateral to the head. The infraspinatus, supraspinatus, and teres minor muscles attach to this elevation.

Lesser Tubercle is a roughened area found medial to the greater tubercle. It serves as the insertion site subscapularis muscle.

Intertubercular Groove is a thin, longitudinal depression between the lesser and greater tubercles. This indentation, which is further designated the bicipital groove, is a way for the tendon of the long head of the biceps brachii. The teres major, pectoralis major, and latissimus dorsi muscles also attach here.

Anatomical Neck is a grooved constriction within the head and tubercles that serves as an attachment point for the articular capsule.

Surgical Neck is a region under the tubercles where the bone narrows and fractures often occur. 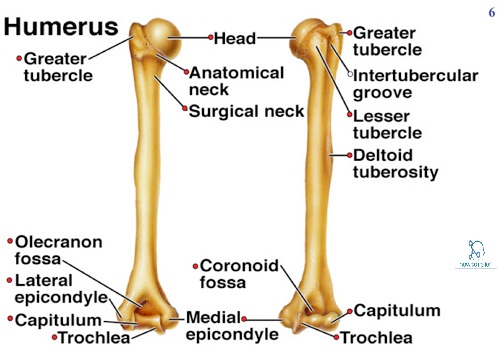 Deltoid Tuberosity is a raised, roughened area located on the lateral side of the shaft at its midpoint. It is a point of the deltoid muscle attachment.

Lateral Epicondyle is a rounded protuberance at the distolateral terminus of the humerus. The posterior surface of the lateral epicondyle accommodates as an attachment point for some of the muscles that extend the wrist and fingers of this hand.

Lateral Supracondylar Ridge is the roughened margin located superior the lateral epicondyle. The brachioradialis muscle attaches this edge of the bone.

Medial Epicondyle is a rounded projection at the distomedial end of the humerus. Some of the muscles that flex the forearm, wrist, and fingers attach to the anterior surface of this marking. 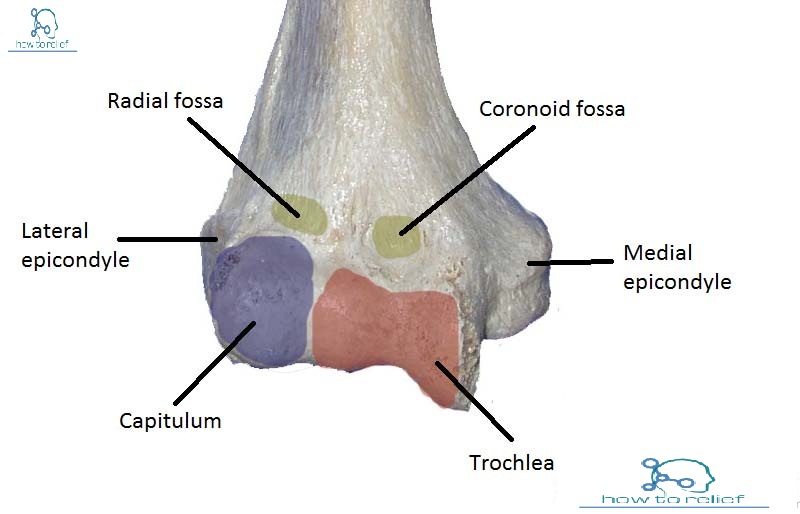 Trochlea is a pulley-shaped formation located medial to the capitulum. This region articulates with the trochlear notch of the ulna bone at the elbow joint.

Capitulum is a small, knob-like prominence on the distolateral end of the humerus. It articulates with the head of the radius bone at the elbow joint.

Coronoid Fossa is a depression located superior to the anterior aspect of the trochlea. This region provides space for the coronoid process of the ulna when the forearm is flexed.

Radial Groove is a small depression placed superior to the capitulum. This region provides the location for the head of the radius when the forearm is flexed. 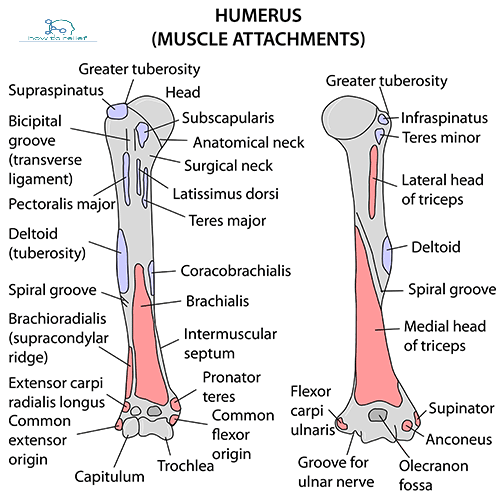