Giant Cell Arteritis: Giant cell arteritis (GCA) or temporal arteritis is the most common form of vasculitis that occurs in adults affecting the large blood vessels of the scalp, neck, and arms. Nearly all patients who develop giant cell arteritis are above the age of 50. Giant cell arteritis commonly causes headaches, facial pain, joint pain, fever, and difficulties with vision, and sometimes permanent visual loss in one or both eyes. 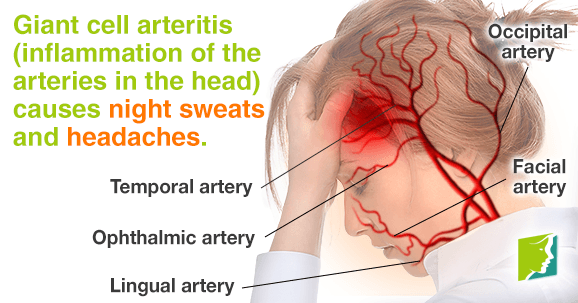 The GCA disease is relatively uncommon and can cause so many different symptoms, the diagnosis of GCA can be difficult to make. With appropriate therapy, Giant cell arteritis is an eminently treatable, controllable, and often curable disease. The disease also called “temporal arteritis” because the temporal arteries, which course along the sides of the head just in front of the temples can become inflamed. However, other blood vessels, the aorta and its branches, can also become inflamed. The term “giant cell arteritis” is used because when it looks under a microscope of inflamed temporal arteries, one often sees large or “giant” cells. The disease is commonly associated with polymyalgia rheumatica. Although women are more prone than men to develop GCA, research implies that men are more likely to undergo potentially blinding eye involvement.

The cause of Giant cell arteritis is unknown but it is considered to be an autoimmune disease in which the body’s own immune system mistakenly attacks the blood vessels, including the temporal arteries. Genetic and environmental agents such as infections play an important role. Because it is uncommon in people under age 50, its cause could be connected to the aging process.

Early manifestations of giant cell arteritis may relate flu symptoms such as fatigue, loss of appetite and fever. The usual common symptoms of GCA are a headache, pain in the shoulders and hips, pain in the jaw after chewing, fever, and blurred vision. Symptoms exactly related to the inflamed arteries of the head comprising:

Some patients possess many of these symptoms; others become only a few.

There are blood tests that help the physician decide who is likely to possess GCA. Almost everyone with Giant Cell Arteritis has an elevated erythrocyte sedimentation rate. The erythrocyte sedimentation rate measures how fast a patient’s red blood cells settle when placed in a small tube. In inflammatory states, red blood cells settle more quickly than in non–inflammatory states. In addition, most patients with Giant Cell Arteritis have a slight–anemia or low red blood cell count. Other conditions can also cause a high sed rate or anemia, so the ultimate diagnosis depends on a temporal artery biopsy.

A few patients with GCA do not possess positive biopsies. The GCA does not affect every part of every temporal artery but can “skip” around. When one biopsy result is negative, biopsying the temporal artery on the other side can guide to the diagnosis.
Imaging Tests
These Imaging tests might be used to diagnose giant cell arteritis and to monitor your response to treatment. Tests might combine:

Positron emission tomography (PET). If your physician suspects you might possess giant cell arteritis in large arteries, such as your aorta, he might recommend PET. A PET scan can generate detailed images of your larger blood vessels and highlight regions of inflammation.

The foremost treatment for giant cell arteritis requires treatment with high dosages corticosteroid, such as prednisone. Immediate treatment is required to prevent vision loss, your physician is likely to start medication even before validating the diagnosis with a biopsy. Typically, treatment starts with 40–60 mg of prednisone, taken by mouth each day.

You’ll likely begin to respond better within a few days of beginning treatment. If you have the visual impairment before starting treatment with corticosteroids, it’s unlikely that your vision will improve. Though, your unaffected eye might be able to compensate for unusual of the visual changes.

You may require to continue taking medication for one to two years or longer. Extended treatment periods are not uncommon. Following the first month, your physician might gradually begin to lower the dosage until you reach the lowest dose of corticosteroids required to control inflammation.
Some symptoms, especially headaches, may return during this tapering period. The rate of tapering prednisone depends on whereby the patient feels, what the physician finds on the exam, and the results of blood tests, including the sedimentation rate.

This is the point at which many people further develop manifestations of polymyalgia rheumatica. Such flares can normally be treated with slight increases in the corticosteroid dose. Your physician might also suggest an immune-suppressing drug called methotrexate.

Corticosteroids can commence to serious side effects, such as high blood pressure, osteoporosis, and muscle weakness. To counter potential side effects, your physician is likely to monitor your bone density and might suggest calcium and vitamin D supplements or other medications prevent bone loss.

The Food and Drug Administration(FDA) recently recommended tocilizumab (Actemra) to treat giant cell arteritis. It’s administered as an injection under your skin. Side effects comprise making you more likely to infections.