Femoral Artery is the large artery in the thigh of the lower limb and the main arterial supply to the leg. The femoral artery is the extension of the external iliac artery and It enters the thigh from behind the inguinal ligament as the common femoral artery.

The femoral artery lies midway within the anterior superior iliac spine and the symphysis pubis. The common femoral artery gives off the profunda femoris artery and shifts the superficial femoral artery to descend along the anteromedial part of the thigh in the femoral triangle.

It runs downward and medially successively via the femoral triangle and adductor canal, and shifts the popliteal artery as it moves through an opening in adductor magnus near the junction of the middle and distal thirds of the thigh.

The superficial femoral artery flexes to follow the femur inferiorly and medially. At its distal edge, it flexes over and descends posterior to the femur before developing the popliteal artery.

Anteriorly, the skin, superficial fascia, deep fascia and the anterior wall of the femoral sheath.

Posteriorly, muscles of the psoas major, the pectineus, and the adductor longus. The posterior wall of the femoral sheath Intervenes between these structures.

Medially, the femoral artery is related to the femoral vein in the upper part of its course. 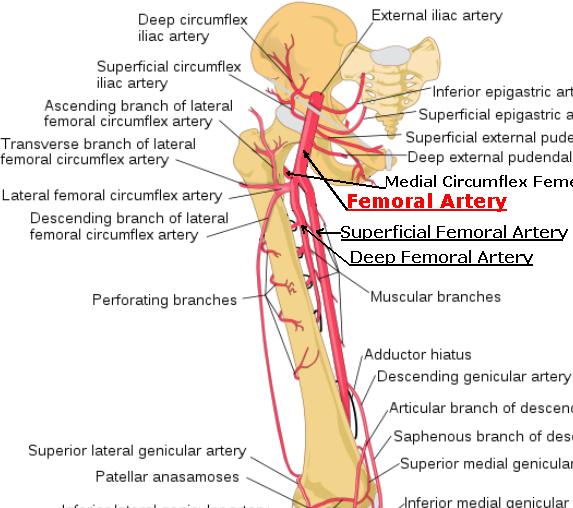 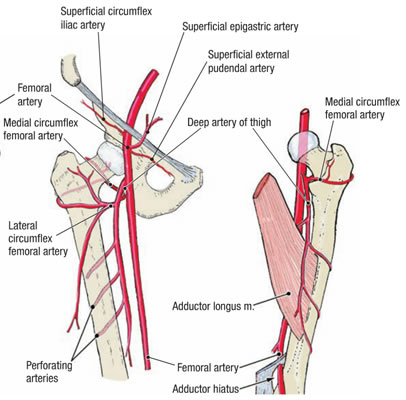 In a femoral triangle, the profunda femoris artery rises from the posterolateral slant of the femoral artery.

The adductor canal closes at an opening in the adductor magnus. The femoral artery passes through this opening and penetrates the posterior compartment of the thigh, proximal to the knee. The femoral artery is now known as the popliteal artery. The descending genicular artery leaves the canal by descending inside the substance of vastus medialis and divides into articular and saphenous branches. The saphenous branch, also named the saphenous artery, follows the saphenous nerve as it rises via the roof of adductor canal.