Diabetic Nephropathy: Diabetic nephropathy is a type of progressive kidney disease that may occur people with type 1 and type 2 diabetes. It manifests as slowly progressive albuminuria with worsening hypertension and renal insufficiency. Diagnosis is based on history, physical examination, urinalysis, and urine albumin/creatinine ratio. Diabetic nephropathy is a notable cause of long-term kidney disease and end-stage renal disease (ESRD), which is when the kidneys no longer work well adequately to meet the needs of daily life. 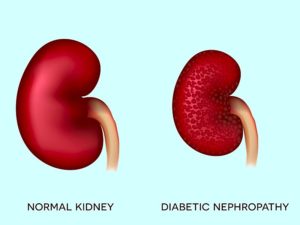 Over 40 percent of cases of kidney failure is induced by diabetes, and it’s figured that nearly 180,000 people are living with kidney failure precipitated by complications of diabetes.

Diabetic nephropathy is the usual common etiology(cause) of nephrotic syndrome in adults. The predominance of renal failure is apparently about 40% among patients with type 1 diabetes mellitus. The prevalence of renal failure in patients with type 2 diabetes mellitus is normally stated as 20 to 30%. The kidneys have numerous tiny blood vessels that purify waste from your blood. High blood sugar from diabetes can destroy these blood vessels.  Other risk factors include :

In the early stages of diabetic nephropathy, you may not notice any signs or symptoms. So it’s important to have regular urine tests to find kidney damage early. Sometimes early kidney damage can be reversed. In later stages, the signs and symptoms include:

Albumin measurements are represented as follows-

The diagnosis is suspected in patients who have proteinuria, especially if they have diabetic retinopathy.

The stages of diabetic nephropathy are determined by the glomerular filtration rate or GFR. The GFR can tell how well the kidneys are working.

Stage 2: Kidney illness with some impairment of kidney function; GFR within 60 and 89.

Stage 3: Mild to drastic impairment of kidney function; GFR within 30 and 59.

Stage 4: Severe damage to kidney function; GFR within 15 and 29.

To reduce your risk of developing diabetic kidney disease:

Early treatment can only delay the onset of diabetic nephropathy. One keystone in the prevention and management of diabetic nephropathy is tight glycemic control. Angiotensin-converting enzyme (ACE) inhibitors or angiotensin receptor blockers (ARBs) have been proved to help lowering blood pressure, as well as preserve kidney function and limit further damage.

There are three types of dialysis:

A physician may suggest a kidney transplant if diabetic nephropathy has reached the final stages.