Chikungunya Fever (CF) is a viral illness caused by an arbovirus carried by the Aedes mosquitoes. The disease was the first time in the form of an outbreak in Tanzania. The name is originated from the ‘makonde’ dialect which means ‘that which bends up’, symbolizing the physical appearance of a patient with severe clinical features. 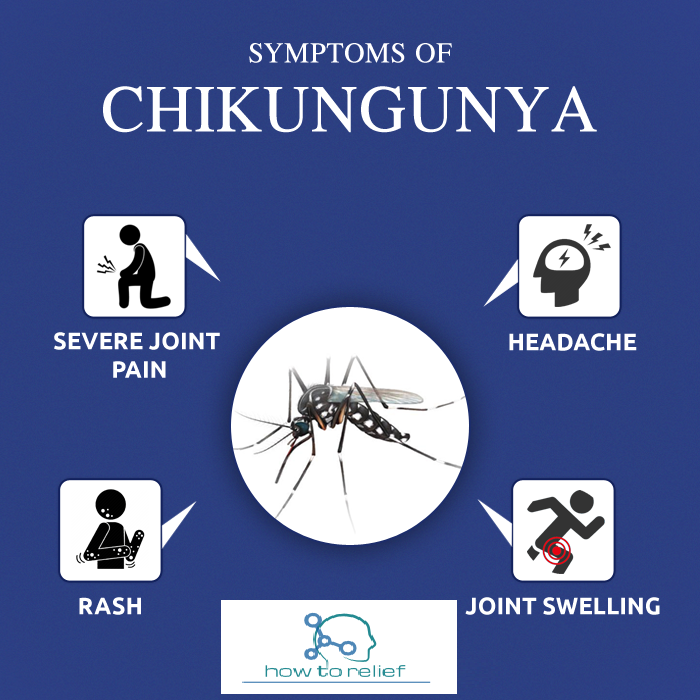 Chikungunya fever is caused by the virus of the same name (CHIK virus in short) which is an RNA virus that relates to the Alphavirus genus of the Togaviridae, the family that comprises a number of viruses that are mostly transmitted by arthropods. The virus was first isolated in 1952-1953 from both man and mosquitoes during an epidemic of fever that was considered clinically equal from dengue fever in Tanzania.

It is a single-stranded RNA virus, heat labile and sensitive to temperatures above 580 Celsius. Three lineages with distinct genotypic and antigenic characteristics have been identified: two phylogenetic-groups from Africa and from Asia. Chikungunya virus strains isolated in India during the 2006 flash are closely related to strains isolated that year from Réunion islands.

CHIK virus causes a febrile illness in the majority of people with an incubation period of 2-4 days from the mosquito bite. Viremia persists for up to 5 days from the clinical onset. Commonest presenting features- 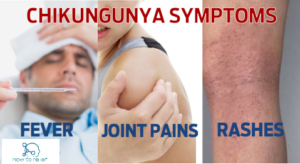 The fever varies from low grade to high grade, lasting for 24 to 48 hours. Fever rises abruptly in some, reaching 39-400C, with shaking chills and rigour and usually subsides with the use of antipyretics. No diurnal variation was observed for the fever. In the recent outbreaks, many patients presented with arthralgia without fever. The joint pain tends to be worse in the morning, relieved by mild exercise and exacerbated by aggressive movements. The pain may remit for 2-3 days and then reappear in a saddleback pattern. Migratory polyarthritis with effusions may be seen in around 70% cases but resolves in the majority. Ankles, wrists and small joints of the hand were the worst affected. Larger joints like knee and shoulder and spine were also involved. There is a tendency for the early and more significant involvement of joints with some trauma or degeneration.

In the recent outbreaks, many patients presented with arthralgia without fever. The joint pain tends to be worse in the morning, relieved by mild exercise and exacerbated by aggressive movements. The pain may remit for 2-3 days and then reappear in a saddleback pattern. Migratory polyarthritis with effusions may be seen in around 70% cases but resolves in the majority. Ankles, wrists and small joints of the hand were the worst affected. Larger joints like knee and shoulder and spine were also involved. There is a tendency for the early and more significant involvement of joints with some trauma or degeneration.

Other features
The transient maculopapular rash is seen in up to 50 % of patients. The maculopapular eruption persisted for more than 2 days in approx. 10% of cases. Intertriginous aphthous-like ulcers and vesiculobullous eruptions were noticed in some. A few persons had angiomatous lesions and fewer had purpuras. Stomatitis was observed in 25% and oral ulcers in 15% of patients. Nasal blotchy erythema followed by photosensitive hyperpigmentation (20%) was observed more commonly in the recent epidemic. Exfoliative dermatitis affecting limbs and

The confirmation of Chikungunya fever any of the followings:

IgM antibodies demonstrable by ELISA may appear within two weeks. It may not be advisable to do the antibody test in the first week. In some persons, it may take six to twelve weeks for the IgM antibodies to appear in sufficient concentration to be picked up in ELISA.

No significant pathognomonic haematological finding is seen. Leucopenia with lymphocyte predominance is the usual observation. Thrombocytopenia is rare. Erythrocyte sedimentation rate is usually raised. C-Reactive Protein is increased during the acute phase and may persist elevated for a few weeks. A small proportion of patients has tested positive for rheumatoid factor during and after clinical episode.

Differential diagnosis
Fever with or without arthralgia is a very common manifestation of several other diseases. CHIK fever may not have the typical manifestations or it may co-exist with other infectious diseases like dengue fever or non-infectious diseases like rheumatoid arthritis. Some of the diseases which can be considered in differential diagnosis are:

(2)Leptospirosis Severe myalgia localized to calf muscles with conjunctival congestion/ or subconjunctival haemorrhage with or without oliguria or jaundice in a person with the history of contact with contaminated water might suggest Leptospirosis.

(3) Malaria Periodicity of fever and alteration of consciousness/seizures should prompt the diagnosis of malaria.

(4) Rheumatic fever is more common in the children and presents with fleeting (migratory) polyarthritis predominantly affecting the large joints. Modified Jones criteria should be the basis for diagnosis. Raised ASO titer and a history of a recurrent sore throat are other points to be noted.

(5) Meningitis High fever with neck stiffness or alteration of consciousness should prompt thought about meningitis. All cases of meningoencephalitis during an outbreak of CF must be suspected to have CF.

Clinical Management of CF is discussed at two stages

(1) Acute stage of the illness and

When to seek medical help?

The osteoarticular problems are seen with Chikungunya fever usually subside in one to two weeks’ time. In approximately 20% of cases, they disappear after a gap of a few weeks. In less than 10% of cases, they tend to persist for months. In about 10 % cases, the swelling disappears; the pain subsides, but only to reappear with every other febrile illness for many months. Each time the same joints get swollen, with mild effusion and symptoms persist for a week or two after the subsidence of the fever. Complement-mediated damage and persistence of the virus in intracellular sanctuaries have been implicated in occasional studies. The destroyed metatarsal head has been observed in patients with persistent joint swelling.

Management of osteoarticular manifestations follow the general guidelines given earlier. Since an immunologic aetiology is suspected in chronic cases, a short course of steroids may be useful. Care must be taken to monitor all adverse events and the drug should not be continued indefinitely to prevent adverse effects. Even though NSAIDs produce symptomatic relief in the majority of individuals, care should be taken to avoid renal, gastrointestinal, cardiac and bone marrow toxicity. Cold compresses have been reported to lessen the joint symptoms.

Disability due to Chikungunya fever arthritis can be assessed and monitored using one of the standard scales. As discussed above, proper and timely physiotherapy will help patients with contractures and deformities. Non-weight bearing exercises may be suggested.; e. g. slowly touching the occiput (back of the head) with the palm, slow ankle exercises, pulley assisted exercises, milder forms of yoga etc. Surgery may be indicated in severe and disabling contractures. The management plan may be finalized in major hospitals, but the follow-up and long-term care must be done at a domiciliary or primary health centre level.

Occupational assistance after detailed disability assessment needs to be provided.

Some patients are referred to a physical therapist by their doctor, but others seek therapy themselves.

Whichever way a patient comes to a physical therapist, they can expect to:

Patients often train with a physical therapist in exercises that they can do at home, to help them function more effectively.

Various neurologic sequelae can occur with persistent chikungunya fever. Approximately 40% of those with CF will complain of various neurological symptoms but hardly 10% will have persistent manifestations. Peripheral neuropathy with a predominant sensory component is the most common (5-8%). Paresthesias, pins and needles sensations, crawling of worms sensation and disturbing neuralgias have all been described by the patients in isolation or in combination. Worsening or precipitation of entrapment syndromes like carpal tunnel syndrome has been reported in many patients. Motor neuropathy is rare. Occasional cases of ascending polyneuritis have been observed as a post-infective phenomenon, as seen with many viral illnesses. Seizures and loss of consciousness have been described occasionally, but a causal relationship is yet to be found. Anti-neuralgic drugs (Amitriptyline, Carbamazepine, Gabapentin, and Pregnable) may be used in standard doses in disturbing neuropathies.

Ocular involvement during the acute phase in less than 0.5% cases as described above may lead to defective vision and painful eye in a small percentage. Progressive defects in vision due to uveitis or retinitis may warrant treatment with steroids.

The skin manifestations of Chikungunya fever subside after the acute phase is over and rarely require long term care. Nevertheless worsening of psoriatic lesions including atopic lesions may require specific management by a qualified specialist. Hyperpigmentation and papular eruptions may be managed with Zinc oxide cream and/or Calamine lotion. Persistent non-healing ulcers are rare. Scrotal and aphthous-like ulcers on the skin and intertriginous regions may be managed by saline compresses, and topical or systemic antibiotics if secondarily infected.

Neuro-psychiatric / emotional problems have been observed in up to 15% cases. These are more likely in persons with pre-morbid disorders and those with a family history of mood disorders. They may take different forms.

The emotional and psychosocial points need individual assessment and have to be considered in the social context of the patient and community. Often patients become inadequate information regarding Chikungunya. Broadly, psychosocial assistance and reassurance may solve some of the problems. Well, thought about plan for community support, occupational and social rehabilitation may hold the key to success.