First Cervical spine (C1) is also known as the atlas. The atlas (C1) is the most superior (first) cervical vertebra of the spine. The atlas joint connecting the skull and spine. The atlas(C1) and axis(C2) are specialized to allow a greater range of motion than normal vertebrae. They are responsible for the nodding and rotation movements of the head.

The atlas is ring-shaped and does not have a body and no spinous process, unlike the other of the vertebrae of the spinal column. On the superior surface of the atlas, has a pair of concave facets. The facets articulate with rounded condyles on the underside of the skull’s occipital bone. This junction allows the head to nod up and down. Below the atlas bone is the axis bone (C2). Pivot and gliding joints of the atlas & axis bones allow the head to move side-to-side. 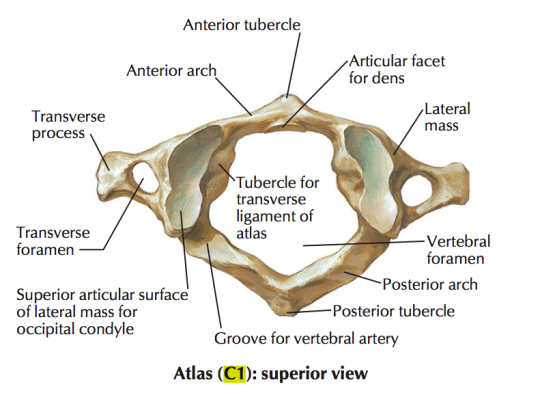 Vertebral foramen is a large opening in the center of the bone through which the spinal cord passes.